Home>Posts>Tours>The 21 caves of Polignano a Mare

A visit to the caves of Polignano a Mare is a must when you come to Puglia. The most suitable way to visit them is certainly the sea kayak. In fact with this absolutely ecological boat we can enter all, but really all the caves that have a marine entrance. We will be sure not to damage the original coastal environment and we will be able to see all the details that interest us up close. In our sea kayak tour at Polignano a Mare we make you do exactly this!

Check out the TRIPS CALENDAR

Below is the map with the position of each cave in sequence from left to right.

“Cala Paura” Cave means Fear Cove Cave. The “Cala Paura” cave is a small shelter carved out of the rock. It is partly masked by a wall built at the end of the last century, for the construction of the first city bathhouse.

The Blue Cave is a cavern about three meters high which is entered through a low passage between the surface of the water and the rock. On the right, a few meters from the entrance, there is an underwater opening which in particular conditions of light creates beautiful bright reflections. Hence the name of Blue Cave. At the bottom there is a small sandy beach.

“Piana” Cave means Flat Cave. The “Piana” Cave or “Basso Porto” Cave, as they call it Polignano’s citizens, is a marine cave consisting of a large quadrangular cave, characterized by a perfectly flat and horizontal vault. It has two entrances: one from the ground and the other, opposite, from the sea. Today it is one of the symbols of Polignano, right at the corner under the “Bastione di Santo Stefano”.

Between Lama Monachile and the edge of the Bastione di Santo Stefano, there are two small openings in the rock that allow entry into this cave.

“Arcivescovado” Cave means Archbishopric Cave. Polignano has the belief that this cave was the outlet to the sea of secret tunnels that allowed the escape of the prelates of Polignano from the episcopal palace during enemy incursions. In reality, however, this large cave does not hide any secrets as the narrow passage becomes impractical after a few meters.

“Palazzese” Cave means Cave of the Palace. The “Palazzese” Cave is the largest of all Polignano’s caves. It is called because it belonged to the Marquis Leto, feudal lords of Polignano in 1700. The cave can be accessed both from the ground, through a small staircase carved into the rock by the Marquises Leto, and from the sea through two openings.
A large terrace overlooks the cave and allows visitors to admire it in all its majestic beauty. Inside it is formed by a very large semicircular environment, with a diameter of 30 meters, communicating with a second smaller environment with an outlet to the sea and a small pebbly beach on the bottom. The cave has been home to a restaurant for several decades, with an adjoining hotel, known all over the world.

In 1960 large fragments of Roman wine vessels were collected. It is the confirmation of the presence of a Roman colony in Polignano.

It has 48 steps carved out of silica that descend from the large open space above to sea level. It is not easy to access, but the vision presented to those who manage to enter it repays the effort made.

Really cramped cave with a small sleeping partition on the water.

The “Frascina” Cave does not have the beauty of the other Polignano’s caves, in fact it looks more like a large niche under the rocks.

“Pietro e Paolo” Cave means Peter and Paul Cave. The Pietro e Paolo caves have the same name because they are very close. Local fishermen call them Delle Monache Caves. Cave number 1 opens a few meters above sea level and is characterized by the presence of a large natural column at the entrance.
Next to it and further down, there is the Pietro e Paolo Cave 2. Its entrance is on the surface of the water and the sea inside forms a pond only a few centimeters deep.

“Delle Monache” Cave means Cave of the Nuns. Tradition tells that the nuns of the nearby hospital went to this cave in summer to bathe away from prying eyes. A small stepped passageway allowed access to the cave from the floor above. This tunnel was open until a few years ago, but today it is closed.

The “San Gennaro” Cave is the largest of the 4 caves that insist under the large inlet called Hospital or Slaughterhouse. The cavity is protected by north wind and mistral. A reef of rocks delimits the southern part of the entrance. The internal part, large and bright, is completely invaded by the sea. At the highest point under the vault, a narrow passage seems to go under the village. The tunnel, however, still remains unexplored.

“Antro del Macello” Cave means Slaughterhouse Cave. Small cave more similar to a shelter under rock than to a real cave. At the entrance, a series of emerged rocks forms a quay against which the waves break.

“Punta del Ciuccio” Cave means Donkey Cape Cave. A few meters east of the “Antro del Macello” Cave there is the entrance to a cave with a very unusual name. This old toponym refers to the small prominence that enters the sea. The cavity consists of a single environment which emerges almost a couple of meters from the sea in the deepest part.

“Stampagnata” Cave means Roofless Cave. The name of this cave derives from the morphological peculiarity of the internal environment which is partially missing from the vault. “Stampagnata” means in fact in dialect “without roof”, that is uncovered. The cave has two large openings (over two smaller ones placed at the top). The first is at sea level which penetrates almost the entire length; the second is about one meter above the sea.

“Della Colonna” Cave means Column Cave. The cave is located close to the small peninsula overlooking the Eremita rock and is characterized by a double entrance separated by a column. The interior is completely invaded by the sea and is quadrangular in shape. Suggestive are the colors of this cave, determined by the reflections of light in the waters of the entrance.

“Dell’Eremita” Cave means Hermit Cave. Small in size, these caves show no particularities, except for a deposit of red earth in the first cave, the highest one above sea level, and some findings of bones and flints worked in the second, which would suggest a prehistoric human presence in the site. 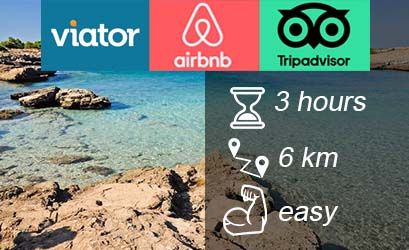 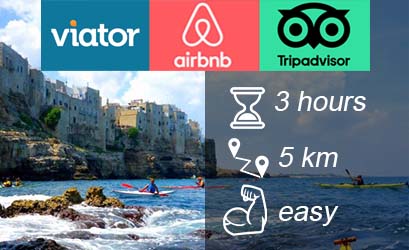