The ones you have read above are the best kayak tours in puglia in our opinion. Kayaking in Puglia is a unique experience! Puglia is one of the most beautiful regions in the world. National Geographic has included Puglia among the 21 best destinations in the world for 2014. “Puglia – reads the reasons – boasts the best of southern Italy: the rhythms of life, the traditions, the beauty of the places. Indomitable. “. Another similar recognition is that which Puglia was awarded, at the end of 2013, by the famous Australian guide Lonely Planet, which placed it in second place among the top ten “Best value travel destinations in the world for 2014“.

Where to go kayaking in Puglia?

For those who love kayaking, you are spoiled for choice. Puglia has a coastal perimeter of 820 km, to which must be added the approximately 50 km of the Tremiti islands. In Salento we have the greatest concentration of beaches and stretches of coast to say the least beautiful. Just mention, on the Adriatic stretch, the coast of Polignano and Monopoli, Torre dell’Orso, Santa Cesarea Terme, Castro, Santa Maria di Leuca and, on the Ionian coast, Ugento, Gallipoli, Porto Selvaggio, Porto Cesareo, Torre Lapillo and San Pietro in Bevagna. There is something for all tastes. Wonderful beaches with crystal clear waters and stretches of rocky coast full of ravines and caves, all to be explored.

A kayak tour to visit Puglia

Kayak is the perfect boat for this type of exploration because its small size allows you to reach places and beaches otherwise unreachable by land or with large motor boats. The perspective from the sea then gives indescribable emotions, difficult to tell or express in words. Now we just have to describe the 7 most beautiful places where to paddle in Puglia.

the circumnavigation by kayak of the only archipelago in Puglia

The Tremiti Islands represent one of the most unspoiled places in Puglia. They are a protected marine area and are part of the Gargano National Park. The archipelago is made up of five islands. Two are inhabited: San Nicola and San Domino. The others, Capraia, Cretaccio and the distant Pianosa, are uninhabited.

The most beautiful island to kayak is undoubtedly San Domino. It is chock full of beautiful caves each different from the other. Unfortunately there is no possibility to rent kayaks or take guided tours, so if you want to visit the archipelago, you are forced to bring your kayak by ferry from Termoli and use the slide adjacent to the small port of San Domino for boarding and landing.

In 2018 I made the circumnavigation of all the islands of the archipelago and I filmed the most beautiful moments of navigation during the tour of San Domino in this video .
The most trained kayakers will certainly be able to tour all the islands (except Pianosa) in one day of kayaking. It is better to choose a day of absolutely calm sea, without a mistral, and to turn San Domino and San Nicola in the 7 hours that elapse between the arrival at the ferry port, around 9:30 am, at the departure of the same in the afternoon, around 4:30 pm. It is important to have a trolley to transport the kayak by ferry and on the quay.

The Gargano promontory , also called the “spur of Italy” is an area rich in natural beauty , on a par with the much more noble Salento , another jewel of Puglia. Along the coast you can find ancient watchtowers or, on the higher ones, the characteristic trabucchi, ingenious fishing machines built entirely of wood, now almost all converted into restaurants.

The stretch of coast between Mattinata and Vieste is simply gorgeous! It has a very high and jagged coast and is full of caves, some of which are immense!

The first route I recommend is about 16km long. It starts from the beach of Baia della Pergola , easily reachable by car. With the kayaks you will go north to the beach of Baia San Felice . On the way you can admire a myriad of caves, including the famous caves “Grotte Sfondate”, small and large. Here you can see a video of a kayak trip in 2019.

The second route that I recommend is about 17km long. It always starts from the beach of Baia della Pergola and goes down to Vignanotica beach . the path is chock full of caves and coves but the highlight is the passage to the monumental Baia delle Zagare .

Polignano is one of the most popular destinations for tourists in Puglia. Thousands, in any month of the year, rush to see the town of Domenico Modugno. A pearl a few km from the regional capital. From the ground you can visit, in addition to the statue of Domenico Modugno, the famous Lama Monachile , two overhanging rock walls and a small inlet in the middle.

But the real wealth of the country lies in its high rocky coast overlooking the sea. Here are a myriad of caves, one more beautiful than the other. In addition to the famous Palazzese Cave , now home to one of the 25 most beautiful restaurants in the world, there are many others, which can be visited in all their meanings only and exclusively by kayak.

The Polignano kayak trip is a new trip that we offer as a guided tour. The path we follow is 3 + 2km long, considering the outward and return journeys without entrance to the caves.

The most interesting stretch of coast goes from Lama Monachile to the Eremita islet , while the boarding and landing points useful for the trip are Porto Alga (on south) and Cala Paura (on north).
The view from the sea is amazing, unmatched in Puglia!

Torre dell’Orso is a marina of Melendugno (LE). It has a beautiful, very extensive and crescent-shaped beach between two cliffs. Offshore you can admire the two famous white stacks, the Two Sisters .

In the vicinity of Torre dell’Orso , precisely to the north, towards Roca , there is a truly magical place: the Cave of Poetry , one of the most beautiful natural pools in the world that attracts thousands of tourists every year. The cave has a rock overlooking the crystal clear waters from which you can dive from a height of more than 5 meters. Here the stop with the kayak is absolutely mandatory.

In the longest trip, the stretch of coast that we visit by kayak goes from Roca to Frassanito and is about 9km long, 18km considering round trip.

In the shorter one we stop on the Torre dell’Orso beach and go back.

let’s discover with our kayaks this magnificent coast of Puglia

Castro is an ancient medieval village that has now become very famous, above all thanks to the marvelous characteristics of its coast, which is very indented here. The sea takes on an intense blue in this area, with bright shades of bright green and the seabed turns out to be perfect for diving lovers.

Along the coast there are various caves of marine and non-marine formations, including the famous Zinzulusa and Palombara caves, which cannot be visited from the sea.

Then approaching Santa Cesarea Terme, we can disembark on the beautiful Porto Miggiano beach and visit the Sulphurous Caves .

Two trips can be made, a long one (15km to and fro) and a short one (11km to and fro). In the longest trip, the stretch of coast to visit by kayak goes from Castro (slipway of the marina) to the northern tip of Santa Cesarea Terme , then back. In total they are 15km.

It starts from Castro , stops on the beach of Porto Miggiano, visits the coast of Santa Cesarea Terme and finally returns to the port of Castro .

On the shorter trip, the stretch of coast to visit by kayak goes from Castro (marina slipway) to Porto Miggiano beach, than back.

by kayak in the southernmost point of Puglia

Santa Maria di Leuca is the southernmost town in Puglia. It is located on the heel of Italy, where the Adriatic and Ionian seas meet. The coast is high and jagged, interspersed with coves and sandy beaches. It is full of caves and inlets that we can go to find thanks to our precious marine boat: the kayak.

There are two routes that I recommend kayaking, one on the Adriatic side and the other on the Ionian side. Let’s start with the first and longest.

We flank the splendid Ionian coast of Santa Maria di Leuca, entering many caves including: Grotta del Drago, Grotta della Stalla, Grotta Tre Porte, Grotta del Presepe, Grotta del Diavolo and Grotta Porcinara . Finally we land on the only beach in Santa Maria di Leuca, close to the elegant promenade, where we stop for a swim and have a packed lunch. We start north to visit the Adriatic coast with the high cliff overlooking the sea, full of wonderful caves: Terradico cave, Vedusella cave, Grotta delle Vore and many others. Finally, the return to Marina di Felloniche follows.

We also carry out this second trip starting from the beach of Marina di Felloniche (the first useful embarkation in the north) and stopping at S. Maria di Leuca , on the same beach where the stop is made on the first route.

This route is also beautifully landscaped! It extends on a coast less high than the Adriatic coast but punctured by dozens of cavities in which we will enter and exit without stopping with our kayaks.

Porto Selvaggio is located in Nardò, a municipality in the province of Lecce between Gallipoli and Porto Cesareo. The area, since 1980, is a natural park established by the Puglia region, which includes 432 hectares of coastline. The pine forest that surrounds the beach is what makes the Porto Selvaggio reserve a unique and relaxing place. One of the most famous and unmissable beaches during a trip in Salento is that of the Porto Selvaggio Bay. It is an enchanting place, which offers visitors one of the most suggestive landscapes of the whole Salento coast.

The PORTO SELVAGGIO kayak tour is a trip that we know well, since it is our most popular trip. The route starts from the beach of the small port of Santa Caterina di Nardò and follows the high coast to the north, the highest of the whole Salento Ionian side. You can see hidden caves and ravines, all to be explored!

You pass under the S. Maria dell’Alto Tower, where the most beautiful caves of the trip are located. This trip gives great emotions and allows you to immerse yourself in the transparent waters of the beach at the bottom of the Porto Selvaggio Bay. Here you can immerse yourself in the cold waters of the spring that comes out of some cavities adjacent to the beach. Along the way you will encounter various caves and, if the sea allows, you can enter the beautiful Green Lagoon cave!

The trip is relatively short, just over 5km, considering the outward and return path. In conclusion, if you want to kayak in Puglia you are spoiled for choice! 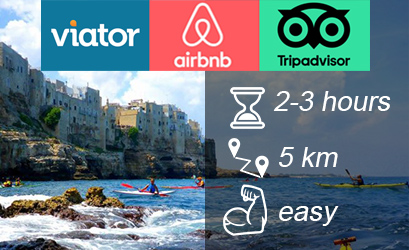